It has been rumored for a long time that Mihui’s new folding screen has been launched, and now spy photos of the real machine have finally surfaced for the first time. According to the display of the new Xiaomi folding screen taken on the subway by netizens, it uses an inward folding design similar to Samsung Z Fold 2 as in the past, and it is pre-installed with MIUI12 system, but it seems that the creases are relatively good. obvious. 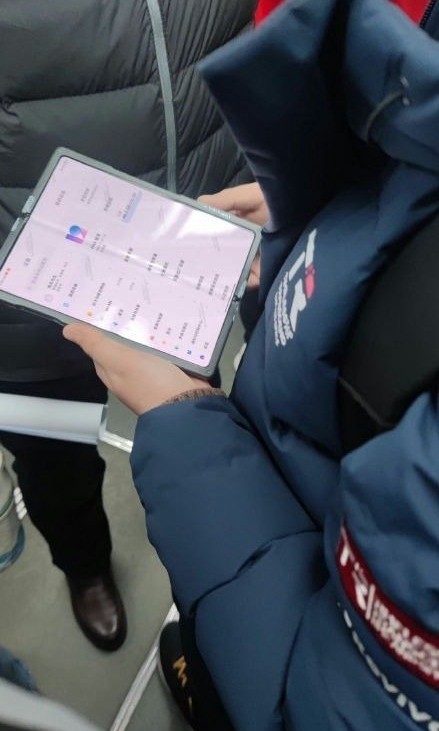 The new mysterious folding screen that netizens photographed on the subway looks like a tablet product at first glance, but because of the obvious crease in the center of the display and the MIUI12 system pre-installed, it can be determined that Xiaomi is developing The new machine with folding screen, and also adopts an internal folding design similar to Samsung Z Fold 2, which is quite consistent with the previous news.

Although netizens did not disclose more details of this new Xiaomi folding screen, according to the statement disclosed by the blogger  in the past, the folding screen engineering machines currently tested by Xiaomi and Huawei are all internal folding main screen + external vice Screen structure, but the screen shape and detail processing are different. In other words, the upcoming Xiaomi folding screen new machine is the same as the patented design exposed last year. It has an internal folding dual-screen design similar to Samsung Z Fold2. After the folding screen is closed, some basic functions can be used with the help of the external screen.

It is worth noting that Xiaomi’s new folding screen machine is still quite different from Samsung in the design of the front lens. Earlier news came out that the Xiaomi folding screen engineering machine will be a perfect screen after unfolding, and the front lens is punched on the external screen. In other words, Xiaomi does not have a front lens on the folding display, but is installed on the external screen by digging holes, which fits well with the form of the spy photos of the real machine exposed before.

As for the specifications and configurations that everyone cares about, there is news from DSCC founder @Ross Young at the end of October last year that the new Xiaomi folding screen will be equipped with an 8-inch folding screen panel, and the supplier is from China Star Optoelectronics. At the same time, some sources said that Xiaomi will also use UTG ultra-thin glass as the cover of the folding screen, which has better durability and touch. Although the initial adaptation of the engineering machine is a 90Hz refresh rate, the production version will support a 120Hz refresh rate.

Or will debut this spring

At present, Xiaomi’s new folding screen machine has been picked up from the MIUI12 system, including the internal code name “Cetus”, will be equipped with a Snapdragon processor and a 100-megapixel camera, etc., and taking into account the market of the machine Positioning is expected to be the Xiaolong 888 processor. However, it is still unclear about the size of the external screen of the new machine. At the same time, judging from the spy photos of the real machine exposed by the subway, it also completely solves the problem of creases like rumors.